I gave myself to teaching, learning about children, and connected with other people, hearing their stories. 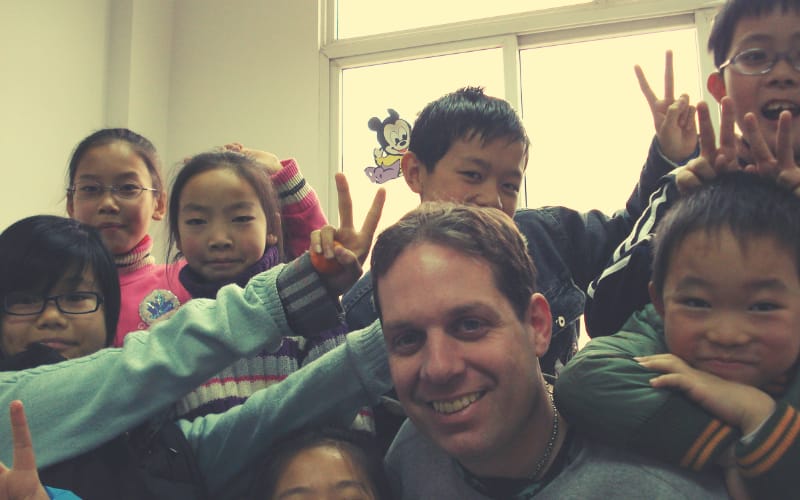 My first job with Aston-Future School in Dalian, China, was not just cool, it was exhilarating.

I liked it at first because they set up everything for me.  I didn’t need to worry about anything, apartment, water, lights, gas, rent, bank account, all taken care of. If I had questions, I’d go to our front desk, and our front of the house manager would make sure it got done.

I signed a 7.5-month contract my first go-round, back in summer of 2007.  Coming from the States where I had 23 different checks to write to 17 different folks, Dalian was a nice change of pace, so streamlined, so relaxed. Teach your classes, and just be.  I went from a fat wallet that barely fit in my back pocket to a small brass-plated money clip, ID, cheat sheet (Chinese phrasebook), school card (address) and cash.  It reduced the pressure I felt from everyday life.

Six months was too short and perhaps a year was too long.  I made 6,300 rénmínbì (people’s money) per month; at the time about 955 USD where one US dollar equaled about 6.68 RMB.

I couldn’t believe how good the food was, so fresh, so rich, so diverse, the culture and the millennia vibrated off of the plate and into my perceptions.

The food was soooo good, so varied and so cheap. Landing with Aston-which is a great place for first timers, training, set-up, support – I really had time to be myself for what felt like the first time in a decade…certainly in my adult life.

I was single, affairs back home settled, and at complete liberty to be who I wanted to be. I was 37, so at a logical stage of personal reinvention, open to virtually anything.  There were many expats, long and short-term like myself, and scads of English speaking staff and people to share with.

Just a walk in the park

A noticeable change upon landing in China is that most parks or green spaces were strictly patrolled, cordoned or just off-limits, except for the sidewalks. You could not touch the grass.

As an outsider, the authorities, whether park wardens or police will be very courteous to you. They give as much leeway as they may, and smile as they guide you back to the walkways.

There was such a park in Central Dalian, however, Labor Park, in which you could play on the grass.

One day a co-worker, Ted, came up to me and said,

-You wanna go to the park with me?

-What do you have in mind?  I thought, it’d be cool but what’s special about this park?

-We can walk on the grass, take some drinks.

-What, are you kidding me, I thought that was all off limits?

-No, I’m not kidding you.  It’s a nice day.  When you are finished with class, come to my office and we’ll head over.

And we did, picking up some ice-cold beverages on the way, the sun was quite hot, even in the far North, this was maybe late July.

Dalian is a city of several millions, and after growing up in the country or small cities of the American South, the park offered a welcome respite. We entered the park and immediately took off cross-country, through the weeds, bushes and copses of trees, coming across the remains of bivouacs and meeting places of teenagers or less fortunate folks.  Being off the sidewalks, it was a release.

A few passers-by would stop, back up and crane their necks as they wondered why these two guys were bushwhacking. The maelstrom that is a Chinese city, electric, eclectic and colorful, receded into the background and was calm again.

We hung out for about an hour in the shade, under the canopy of a Juniper tree, where the fallen needles had made a compacted smooth resting spot under the trees.

Fresh food and a local pastime

As we were ready to make a move, my companion Ted said,

-Hey man, folks are meeting over and Hong Li’s later for some chuàr; barbequed meat skewers.

Hong Li’s was a famous Barbeque joint in town, where you’d receive your very own charcoal grill at the table and cook your sticks (chuàr, actually chuàn, but pronounced with an /r/ sound from the northern dialect).

-OH, yeah! All the seafood is fresh, and comes right out of tanks live, shrimp, fish, scallops, crabs, you name it, and their chuar is bigger than most, still only one rmb a piece. Drinks are only 2-3 rmb, same as the street. Ted lit up excitedly. I felt this wasn’t just a corner bbq stand or chǎo cài (stir-fry) restaurant, so ubiquitous, delicious and cheap.

The walk took about 15 minutes, winding through the city neighborhoods, laid out more like small New Jersey towns.

No building in that area was over 7 stories. Our friends smiled and cheered as we approached, the grill already fired up and smoking, cool drinks all around.

It was a fine time and it helped free my heart, and rediscover myself.  I felt unburdened by all the obligations I’d left, or at least taken a break from, back in my home country.

I gave myself to teaching, learning about children, and connected with other people, hearing their stories. We came from different continents, each of us with a unique tale to tell. I’d traveled a bit and considered myself savvy, yet coming to China offered unexpected gifts, and unforgettable experiences.